In Trump Time: A Journal of America's Plague Year (Hardcover) 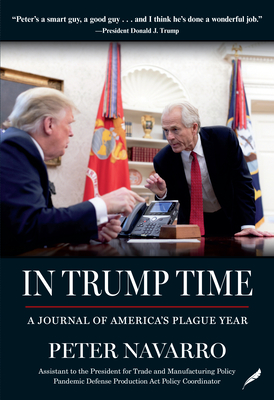 In Trump Time: A Journal of America's Plague Year (Hardcover)


Usually Ships in 1-5 Days
Of those who served in the Trump Administration who might offer an insider's account, Peter Navarro is uniquely qualified. He is one of only three senior White House officials who would be by President Trump's side from the 2016 campaign to the end of the president's first term in office. At the White House, Dr. Navarro served as an Assistant to the President and the Director of the Office of Trade and Manufacturing Policy. He would play a key role in helping President Trump create nearly half a million manufacturing jobs while saving our shipyards and strnghtening our defense industrial base. When the pandemic from Communist China attacked America in 2020, Navarro would serve as the Defense Production Act Polict Coordinator. He would play a pivotal role in securing a travel plan on China in January 2020, a courageous action by the president that saved hundreds of thousands and perhaps millions of lives. Dr. Navarro holds a Bachelor of Arts degree from Tufts University, a Master's in Public Administration from the Kennedy School of Government and a PhD in Economics from Harvard University.