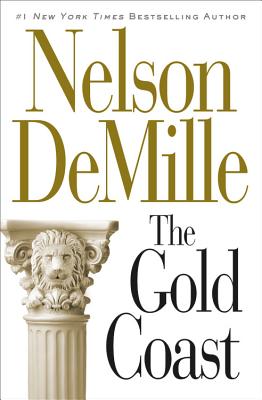 The Great Gatsby meets The Godfather in this #1 New York Times bestselling story of friendship and seduction, love and betrayal.

Welcome to the fabled Gold Coast, that stretch on the North Shore of Long Island that once held the greatest concentration of wealth and power in America. Here two men are destined for an explosive collision: John Sutter, a disillusioned Wall Street lawyer holding fast to a fading aristocratic legacy; and his distinctly unwelcome new neighbor Frank Bellarosa, a Mafia don who has entered the Gold Coast's world of money, mansions, and manners with all the grace of a barbarian chief. Soon Bellarosa infiltrates the lives of John and his regally beautiful wife, Susan, drawing them into his violent criminal world. Told from Sutter's sardonic and often hilarious point of view, and laced with sexual passion and suspense, THE GOLD COAST is Nelson DeMille's enduring fan favorite.
Nelson DeMille is the #1 New York Times bestselling author of nineteen acclaimed novels including Night Fall, Wildfire and The General's Daughter, which was a major motion picture starring John Travolta. He has sold nearly 50 million books worldwide. Before launching his forty-year writing career, he was a U.S. Army lieutenant who served in the Vietnam War as an infantry platoon leader with the First Calvary Division. During his service in Southeast Asia from 1967-1968, he was decorated with numerous awards including the Air Medal, Bronze Star, and the Vietnamese Cross of Gallantry. As an author, he has served as the past president of the Mystery Writers of America, and is a current member of The Authors Guild, American Mensa, and International Thriller Writers. He holds three doctorates: Doctor of Humane Letters from Hofstra University, Doctor of Literature from Long Island University, and Doctor of Humane Letters from Dowling College. He currently resides on Long Island with his family.
"A true master."
—Dan Brown

"A marvelous contemporary writer with something to say, something as rare as it is rewarding."—New York Daily News

"A master at keeping the reader hanging on to see what happens next."
—The Associated Press

"One of the greatest storytellers of ours or any time."
—-Providence Journal