Swing and a Hit: Nine Innings of What Baseball Taught Me (Hardcover) 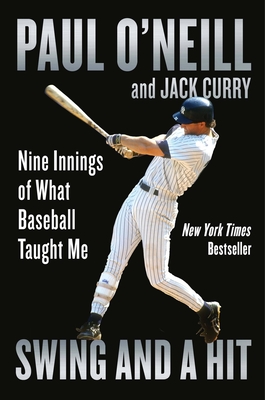 Swing and a Hit: Nine Innings of What Baseball Taught Me (Hardcover)

The fun and fiery memoir of All Star Yankee and five-time World Champion, Paul O’Neill.

In SWING AND A HIT, O’Neill elaborates on his most important hitting principles, lessons, and memories—exploring those elements across ten chapters (to align with the nine innings of a baseball game and one extra inning). Here, O’Neill, with his intense temperament, describes what he did as a hitter, how he adjusted to pitchers, how he boosted his confidence, how he battled with umpires (and water coolers), and what advice he would give to current hitters.

O’Neill has always been a tough out at the plate. Recalling how he started to swing at bat as a two-year-old and kept swinging it professionally until he was thirty-eight, O’Neill provides constant insights into the beauty and frustration of playing baseball. The legendary Ted Williams said using a round bat to hit a round ball is the most difficult thing to do in sports. Naturally, O’Neill, who once received a surprise call from Williams that was filled with hitting advice, agrees.

SWING AND A HIT features O’Neill’s most thoughtful revelations and offers clubhouse stories from some of the biggest names in Major League Baseball—hitters, managers, and teammates like Joe Torre, Derek Jeter, Don Mattingly, Pete Rose, and Bernie Williams.

Remember, O’Neill, ever the perfectionist, was the type of hitter who believed that pitchers didn’t ever get him out. For that incredible reason and so many others, SWING AND A HIT is essential reading for any baseball fan.
Paul Andrew O’Neill played seventeen seasons in the major leagues. He played for the Cincinnati Reds (1985–1992) and the New York Yankees (1993–2001). O’Neill accumulated 281 home runs, 1,269 runs batted in, 2,107 hits, and a lifetime batting average of .288. He won the American League batting title in 1994 with a .359 average. He was a five-time World Series champion and a five-time all-star. After retiring from playing baseball, O’Neill became a broadcaster for the Yankees on the YES Network. He currently works on the network as a game analyst.

Jack Curry is an award-winning sports journalist who is an analyst on the Yankees’ pregame and postgame shows on the YES Network, where he has worked since 2010. He has won five New York Emmy Awards. Before joining YES, he covered baseball for twenty seasons at TheNew York Times, first as a Yankees’ beat writer and then as a national baseball correspondent. Curry is also the coauthor of two New York Times bestsellers: Full Count: The Education of a Pitcher with David Cone and The Life You Imagine with Derek Jeter. He currently lives in New Jersey.

“I’ve always known how superb and how prepared Paul O’Neill was as a hitter. After reading SWING AND A HIT now I know all of O’Neill’s secrets and sacrifices and everything that helped make him such a splendid hitter. With every page I read, it was evident how Paul obsessed over the art of hitting and how he learned from some of the game’s best hitters. I loved competing with and against Paul. I loved this book just as much.”—David Cone, Five-Time World Series Champion, Cy Young Award Winner and baseball announcer for The Yes Network and ESPN

“Paul O’Neill’s passion to get a hit was obvious every time he stepped in the batter’s box. He was a fierce competitor who never thought he should make an out. And, in SWING AND A HIT, Paul intimately describes the journey that led to him being such a special hitter. This book is as entertaining and illuminating as one of O’Neill’s feisty at bats. Add another hit to O’Neill’s stats.” —Buck Showalter, Manager of The New York Mets, former manager of the N.Y. Yankees and three-time Manager of The Year.

“Paul O’Neill is so much more than “the warrior.” He is a baseball savant and an incredible student of the game. He and Jack Curry peel away the layers of the five-time world champion in this riveting read. I’ve known Paul for 30 years and I came away knowing much more about hitting and about him than before I picked up this fascinating read.” —Michael Kay, Yankees’ Play-By-Play announcer for the Yes Network.

“Paul O’Neill is one of my all-time favorite teammates. I loved his approach to the game, his passion, his commitment, and his relentless competitive spirit. Paul’s work ethic was unmatched. As a hitter, he was never satisfied. If you want insight into one of my favorite players, read SWING AND A HIT. I guarantee it won’t disappoint.”—Don Mattingly, Miami Marlins’ manager and former Yankees' captain

"Paul had an incomparable combination of being the fiercest competitor on the field, and the nicest, most affable guy off the field. It was like there were two completely different people. His success story began long before he became my teammate. SWING AND A HIT tells that story…and, yes – it is a hit! What else would you expect from Paul O’Neill?"—Bernie Williams, Yankees’ center fielder and four-time World Series champion.

"This is a book for baseball fans, many of whom will enjoy O’Neill’s unique insights on some of the greatest hitters of all time.”—Library Journal