Courtiers: Intrigue, Ambition, and the Power Players Behind the House of Windsor (Hardcover) 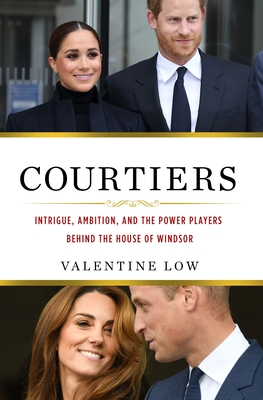 Courtiers: Intrigue, Ambition, and the Power Players Behind the House of Windsor (Hardcover)

The gripping account of how the Royal family really operates, from the journalist who has spent years studying them. Who really runs the show and, as Charles III begins his reign, what will happen next?

Throughout history, the British monarchy has relied on its courtiers - the trusted advisers in the King or Queen's inner circle - to ensure its survival as a family and a pillar of the country. Today, as ever, a carefully selected team of people hidden from view steers the royal family's path between public duty and private life. Queen Elizabeth II, after a remarkable 70 years of service, saw the final seasons of her reign without her husband Philip to guide her. Now, a newly ascended Charles seeks to define what his future as King, and that of his court, will be.

The question of who is entrusted to guide the royals has never been more vital. Yet, as the tensions within the family are exposed to global scrutiny like never before, the task these courtiers face has never been more challenging. With a dark cloud hanging over Prince Andrew as well as Harry and Meghan's controversial departure from royal life, William and Kate - equipped with a very 21st century approach to press and public relations - now hold the responsibility of making an ancient institution relevant for the decades to come. In fascinating and explosive detail, Valentine Low explores the previously unknown relationship between modern courtiers and the royal family.

Courtiers pulls back the veil to reveal an ever-changing system of complex characters, shifting alliances, and a battle of ideas over what the future of the institution should be. This is the inside story of how the monarchy really works, at a pivotal moment in its history.

Valentine Low has been reporting on the royal family for over a quarter of a century, and his exclusives for The Times have made front page news and headlines around the world. After graduating from Oxford University, Valentine worked at the Evening Standard for over twenty years, reporting from all around the world. He lives in West London.

“[Low] explains exactly what a good courtier does: advise royalty and, when necessary, save them from themselves... Some are masters of intrigue. Others disdain it. All have a high tolerance for foibles of all stripes, be it the loose-cannon antics of Edward VIII or Princess Diana’s crying jags.” ―The New York Times Book Review

"Courtiers is a suave history of the monarchy over the past century, seen through the prism of those who serve it...highly readable...fascinating...Low's book has glimpses of the future....Courtiers give us a remarkable insight into the unseen operation of the monarchy." ―The Spectator

"The royal correspondent of The Times delves into the world of the courtier, the advisers who for good or ill guide the House of Windsor through today's choppy waters." ―The Times (UK)

"Low's enjoyable account... chronicles, and explains, the role of those courtiers whose role comes closest to public accountability... [and] there are tantalising unattributed snippets from private interviews... Low's conclusion is a valuable one." ―The Telegraph

"This book is riveting. Extraordinarily well written, it canters along, packed with impeccable inside information. Low . . . is one of the exceptional minds writing about the British monarchy today." ―Thomas Blaikie, Literary Review

"Courtiers is an excellent royal romp based on fact." ―Sphere

"Low clearly [has] an access-all-areas pass to the power players in the three—apparently highly competitive—Royal households, revealing the jockeying to control both the narrative and the ear of the monarch, and the fall outs and missteps that have played out in the tabloids. Courtiers makes Thomas Cromwell in Wolf Hall look like he simply wasn't trying very hard." —Vannessa Cronin, Amazon Editor