Elizabeth II: A Queen for Our Time (Hardcover) 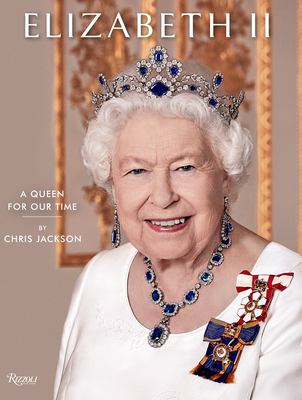 Elizabeth II: A Queen for Our Time (Hardcover)

By Chris Jackson (Photographs by)


Usually Ships in 1-5 Days
ELIZABETH II: A QUEEN FOR OUR TIME is a lively and affectionate celebration of the beloved monarch and a beautiful visual record of her extraordinary reign over the past twenty years leading up to her platinum jubilee.

For as long as many of us can remember, Queen Elizabeth II has been an omnipresent figurehead—an icon. As Head of the Commonwealth, she is respected and admired around the world in equal measure. Her stalwart presence has signaled stability, neutrality, and responsibility. Uniting all that is British as an ambassador and statesperson, Queen Elizabeth II has seen more of the planet and its people than any other head of state and has engaged with them like no other monarch in British history; she is unquestionably a global voice for our time. As a Getty Images royal photographer, Chris Jackson has been granted privileged access to the monarch and the British royal family. He has documented the Queen’s official engagements over the past two decades, during a period of seismic changes in the British monarchy.

"Photographing Her Majesty the Queen has, and is, one of the biggest privileges of my career as Getty Images Royal Photographer. As we head towards the celebration of her Platinum Jubilee, she remains at the heart of a nation and Commonwealth's affections, and is hugely admired and respected around the world,” says Jackson.. “This book is my personal perspective across the last, almost two decades, documenting many different facets of the Monarch's life, from the formal ceremony to family life and those unexpected and heartwarming moments that left me smiling behind the camera".

In Jackson’s photographs, documenting public and private moments and accompanied by warm and engaging text offering a personal perspective and behind-the-shot anecdotes, ELIZABETH II: A QUEEN FOR OUR TIME captures her majesty’s great elegance and charm. From royal tours and state dinners to family time and equestrian triumphs, this book takes us to the heart of what it means to be the head of the British royal family. Much has also been made of the Queen’s enduring style, and Jackson shines a spotlight on the coats, dresses, evening gowns, jewels, bags, and accessories that make up her coordinated wardrobe.

Chris Jackson is Getty Images’ royal photographer. Jackson’s images are published regularly on the front pages of newspapers around the world. Jackson has traveled to more than 100 countries with members of the royal family. He has created one of the most intimate and elegant collections of images of the British royal family over the past two decades. His unique perspective ranges from personal moments to historic royal occasions and stand-alone official portraits. He is also the author of Modern Monarchy: The British Royal Family Today, also published by Rizzoli New York.

"From the moments that take place in public to those that happen behind the scenes, when it comes to Queen Elizabeth, photographer Chris Jackson has been on to witness them all. In this photo-driven book, Jackson shares nearly two decades worth of images (as well as personal memories) that capture the monarch we know and love as well as the more private woman behind the crown." —TOWN & COUNTRY

"Featuring 150 color photographs, Jackson’s new book Elizabeth II: A Queen for Our Time captures the monarch at work, home, overseas, and with her family." —VANITY FAIR