Wait Till Next Year: A Memoir (Paperback) 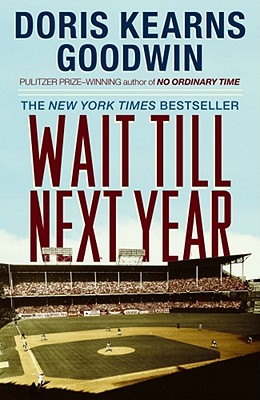 Wait Till Next Year: A Memoir (Paperback)


Usually Ships in 1-5 Days
By the award-winning author of Team of Rivals and The Bully Pulpit, Wait Till Next Year is Doris Kearns Goodwin’s touching memoir of growing up in love with her family and baseball.

Set in the suburbs of New York in the 1950s, Wait Till Next Year re-creates the postwar era, when the corner store was a place to share stories and neighborhoods were equally divided between Dodger, Giant, and Yankee fans.

We meet the people who most influenced Goodwin’s early life: her mother, who taught her the joy of books but whose debilitating illness left her housebound: and her father, who taught her the joy of baseball and to root for the Dodgers of Jackie Robinson, Roy Campanella, Pee Wee Reese, Duke Snider, and Gil Hodges. Most important, Goodwin describes with eloquence how the Dodgers’ leaving Brooklyn in 1957, and the death of her mother soon after, marked both the end of an era and, for her, the end of childhood.
Doris Kearns Goodwin’s interest in leadership began more than half a century ago as a professor at Harvard. Her experiences working for Lyndon B. Johnson in the White House and later assisting him on his memoirs led to her bestselling Lyndon Johnson and the American Dream. She followed up with the Pulitzer Prize–winning No Ordinary Time: Franklin & Eleanor Roosevelt: The Home Front in World War II. She earned the Lincoln Prize for the runaway bestseller Team of Rivals, the basis for Steven Spielberg’s Academy Award–winning film Lincoln, and the Carnegie Medal for The Bully Pulpit, the New York Times bestselling chronicle of the friendship between Theodore Roosevelt and William Howard Taft. She lives in Concord, Massachusetts. Visit her at DorisKearnsGoodwin.com or @DorisKGoodwin.
Christopher Lehmann-Haupt The New York Times Ms. Goodwin has...made familiar events seem fresh again, as if they were happening for the first time only a couple of days ago.

“Lively, tender, and . . . hilarious . . . [Goodwin’s] memoir is uplifting evidence that the American dream still exists—not so much in the content of the dream as in the tireless, daunting dreaming.” —Jodi Daynard, The Boston Globe

Robert Finn The Plain Dealer Skillful, entertaining, and just plain interesting...Like the best pianists, Goodwin makes the difficult seem easy because she is a fluent technician.

“As the tenured radicals attempt to rewrite our nation’s history, the warm, witty, eloquent personal testimony of someone of Doris Kearns Goodwin’s stature is well worth reading.” —Maggie Gallagher, The Baltimore Sun