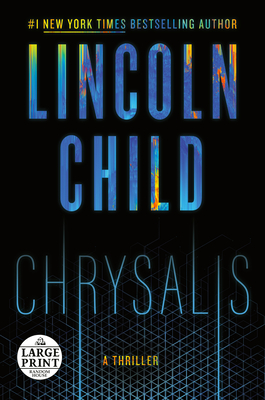 This is book number 6 in the Jeremy Logan Series series.

Like millions of people around the world, Jeremy Logan (famed enigmalogist, or investigator of unexplained things) has grown to rely on his incredible new tech device. Made by Chrysalis, the global multi-billion-dollar tech company, the small optical device connects people in a stunning new way, tapping into virtual reality for the first time on a wide scale. And yet, when Logan is summoned by Chrysalis to investigate a disturbing anomaly in the massive new product rollout, Logan is shocked to see the true scope of the massive company. He also quickly realizes that something in Chrysalis’s technology is very wrong, and could be potentially devastating. The question is what, and where is the danger coming from? In Lincoln Child’s wildly inventive new novel, high tech comes to life alongside the myriad dangers it poses, making for one of Child’s most infectious, entertaining thrillers to date.
LINCOLN CHILD is the New York Times bestselling author of Full Wolf Moon, The Forgotten Room, The Third Gate, Terminal Freeze, Deep Storm, Death Match, and Terminal Velocity, as well as coauthor, with Douglas Preston, of numerous New York Times bestsellers, most recently Bloodless. He lives in Sarasota, Florida.
“As Child masterfully ratchets up the tension, he makes even secondary figures feel real enough for readers to worry about their survival prospects. Michael Crichton fans will find a lot to like.”—Publishers Weekly

“…It’s what happens along the way that makes the [book] so enjoyable: the false leads, blind alleys, and bad assumptions; the slow accumulation of facts that points to a solution that cannot possibly be
true—except that it must be. An intriguing, suspenseful, and very satisfying thriller.”—Booklist

“Logan’s fans won’t be disappointed—and it’s an enjoyable stand-alone thriller, so it’s not necessary to read the series in order. Plenty of imagination, with a peek at plausible near-future technology.”—Kirkus Reviews

“Fans of this series will enjoy the extended romp with Logan and his demands for revelation; newcomers can relax into Lincoln Child’s lively narrative and marvel at how a little stretch of current technology can create a scary world of possibilities.”—New York Journal of Books

“Chrysalis combines the high-tech jargon of Michael Crichton with the storytelling chops of James Rollins, a book destined to be hailed as this generation’s Jurassic Park and just as far ahead of its time.”—Book Trib

“...A truly interesting read. The virtual reality scenes are something else and reminded me at times of some moments in the film Ant-Man. Is there no problem that Jeremy Logan can't handle?”—Bookreporter