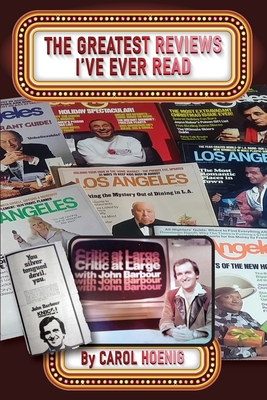 John Barbour isn't beholden to any network or its advertisers, so he can hate or love anything he pleases and tell you why. He's one of the wittiest critics whose reviews sometimes got him in hot water; however, having had an abusive mother and absentee father, being a high school dropout, and deported back to Canada at 17 years old, angering studio heads didn't concern John, which you'll soon discover.

But what happened to all those reviews? John went into a trunk in his garage and hit pay dirt, finding all those issues with his byline where he informed readers about classics such as Network, Grease, The Sting and so many others.

In The Greatest Reviews I've Ever Read, come along with Carol Hoenig as she discusses with John some of the best (and worst) films to ever grace the silver screen

Carol Hoenig is President of Carol Hoenig, Publishing Consultant, Inc. and the author of Without Grace, Of Little Faith, and The Author's Guide To Planning Book Events. Her essays, articles, book reviews and short stories appear in a wide number of publications.

John Barbour is recognized as 'The Godfather of Reality TV' as the creator-producer, co-host, and writer of the trendsetting hit Real People. He won the first of his five Emmys as the original Host of 'AM LA' in 1970 where he interviewed controversial anti-war guests like Muhammad Ali, Cesar Chavez and Jane Fonda. He was the first in America to do film reviews on the news, winning three more consecutive Emmys as KNBC's Critic-At-Large and ten years as Los Angeles Magazine's most widely read and quoted controversial critic. Prior to that he was a successful topical stand-up comedian, appearing on The Dean Martin Show, The Tonight Show, and others. He is the author of Your Mother's Not a Virgin (The Bumpy Life and Times of the Canadian Dropout Who Changed the Face of American TV) and The Wittiest Man in America...Is Canadian. His films include The American Media and the Second Assassination of President John F. Kennedy, The Garrison Tapes and Ernie Kovaks: Television's Original Genius.