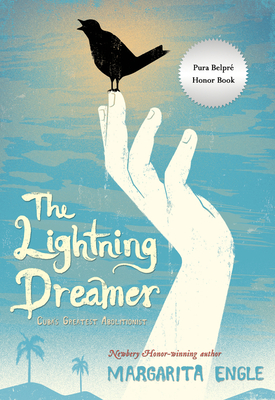 
Usually Ships in 1-5 Days
“I find it so easy to forget / that I’m just a girl who is expected / to live / without thoughts.”

Opposing slavery in Cuba in the nineteenth century was dangerous. The most daring abolitionists were poets who veiled their work in metaphor. Of these, the boldest was Gertrudis Gómez de Avellaneda, nicknamed Tula. In passionate, accessible verses of her own, Engle evokes the voice of this book-loving feminist and abolitionist who bravely resisted an arranged marriage at the age of fourteen, and was ultimately courageous enough to fight against injustice. Historical notes, excerpts, and source notes round out this exceptional tribute.

Margarita Engle is a Cuban-American poet and novelist whose work has been published in many countries. Her many acclaimed books include Silver People, The Lightning Dreamer, The Wild Book, and The Surrender Tree, a Newbery Honor Book. She is a several-time winner of the Pura Belpré and Américas awards, as well as other prestigious honors. She lives with her husband in Northern California. For more information, visit www.margaritaengle.com.

A Pura Belpré Honor Book  Winner of the 2014 PEN Literary Award for Best Young Adult Book  VOYA Top Shelf for Middle School Readers 2013 list  2014 International Latino Book Award Honorable Mention  An NCTE Notable Book for the Language Arts  An ALSC Notable Children's Book for 2013  YALSA 2014 Best Fiction for Young Adults   * "This is the context for a splendid novel that celebrates one brave woman who rejected a constrained existence with enduring words that continue to sing of freedom."  —Booklist, starred review   "An inspiring fictionalized verse biography of one of Cuba's most influential writers. . . . Fiery and engaging, a powerful portrait of the liberating power of art."  —Kirkus   "In these poems, their longings for freedom, their fears, their loves, and their heartaches are elegantly crafted through images that make the island of Cuba and its people vividly real and connect them to the hearts of contemporary readers."  —Bulletin   "A quick and powerful read worthy of addition to any collection. The verses speak of tolerance and acceptance beyond the context of this story."  —VOYA   "Engle adds another superb title to her lengthening list of historical novels in verse. . . . This is a must-have for . . . anyone in need of a comparative study to our own country's struggle with slavery." —School Library Journal    —