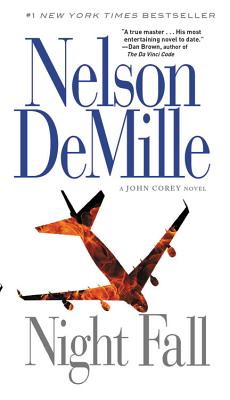 This is book number 3 in the A John Corey Novel series.

New York Times bestselling author Nelson DeMille does it again with Elite Anti-terrorist Task Force Agents John Corey and Kate Mayfield discovering corruption deep in the FBI and they set out to find the truth.

On a Long Island beach at dusk, Bob Mitchell and JanetWhitney conduct their illicit love affair in front of a video camera, set to record each steamy moment. Suddenly a terrible explosion lights up the sky. Grabbing the camera, the couple flees as approaching police cars speed toward the scene. Five years later, the crash of Flight 800 has been attributed to a mechanical mal-function.

But for John Corey and Kate Mayfield, both members of the Elite Anti-terrorist Task Force, the case is not closed. Suspecting a cover-up at the highest levels and disobeying orders, they set out to find the one piece of evidence that will prove the truth about what really happened to Flight 800-the videotape that shows a couple making love on the beach and the last moments of the doomed airliner.
Nelson DeMille is a former U.S. Army lieutenant who served in Vietnam and is the author of nineteen acclaimed novels, including the #1 New York Times bestsellers Night Fall, Plum Island, The Gate House, The Lion, The Panther, and Radiant Angel. His other New York Times bestsellers include The Charm School, Word of Honor, The Gold Coast, Spencerville, The Lion's Game, Up Country, Wild Fire, and The General's Daughter, the last of which was a major motion picture. For more information, you can visit NelsonDeMille.net.