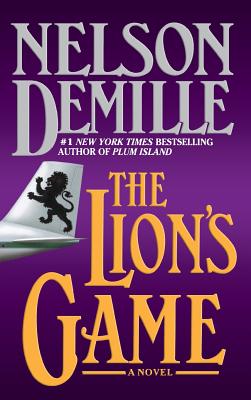 This is book number 2 in the A John Corey Novel series.

With the young terrorist known only as "The Lion" on the prowl and out for revenge,  detective John Corey is pushed to his limit as the lives of American pilots are on the line, and Corey is caught in a deadly race with no room for error.

Detective John Corey, last seen in Plum Island, now faces his toughest assignment yet: the pursuit and capture of the world's most dangerous terrorist -- a young Arab known as "The Lion" who has baffled a federal task force and shows no sign of stopping in his quest for revenge against the American pilots who bombed Libya and killed his family. Filled with unrelenting suspense and surprising plot twists at every terrifying turn, The Lion's Game is a heartstopping race against time and one of Nelson DeMille's most riveting thrillers.
Nelson DeMille is a former U.S. Army lieutenant who served in Vietnam and is the author of nineteen acclaimed novels, including the #1 New York Times bestsellers Night Fall, Plum Island, The Gate House, The Lion, The Panther, and Radiant Angel. His other New York Times bestsellers include The Charm School, Word of Honor, The Gold Coast, Spencerville, The Lion's Game, Up Country, Wild Fire, and The General's Daughter, the last of which was a major motion picture. For more information, you can visit NelsonDeMille.net.