A Face for Picasso: Coming of Age with Crouzon Syndrome (Hardcover) 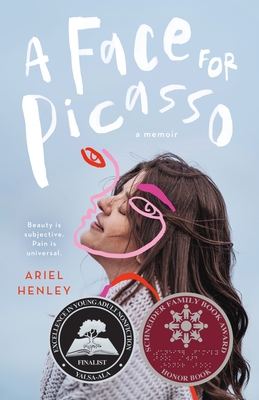 A Face for Picasso: Coming of Age with Crouzon Syndrome (Hardcover)

"Raw and unflinching . . . A must-read!" --Marieke Nijkamp, #1 New York Times-bestselling author of This Is Where It Ends

"[It] cuts to the heart of our bogus ideas of beauty." –Scott Westerfeld, #1 New York Times-bestselling author of Uglies


I am ugly. There's a mathematical equation to prove it.

At only eight months old, identical twin sisters Ariel and Zan were diagnosed with Crouzon syndrome -- a rare condition where the bones in the head fuse prematurely. They were the first twins known to survive it.

Growing up, Ariel and her sister endured numerous appearance-altering procedures. Surgeons would break the bones in their heads and faces to make room for their growing organs. While the physical aspect of their condition was painful, it was nothing compared to the emotional toll of navigating life with a facial disfigurement.

Ariel explores beauty and identity in her young-adult memoir about resilience, sisterhood, and the strength it takes to put your life, and yourself, back together time and time again.

Ariel Henley is a writer from Northern California with a B.A. in English and Political Science from the University of Vermont. She is passionate about writing as a form of activism, and hopes to use her story to promote mainstream inclusion for individuals with physical differences. Her work has appeared in The New York Times, The Atlantic, The Washington Post, and Narratively. A Face for Picasso is her debut novel.

"A gripping autobiography and a provocative interrogation of beauty that will resonate with many young readers, especially as they develop their own identities in a social-media focused culture." —The Bulletin of the Center for Children's Books, starred review

"Expertly crafted, infused with emotional resonance and populated with flawed characters who grow and change as the story unfolds. Ariel’s richly detailed perspective allows the reader to deeply understand the trauma of experiencing so many difficult medical procedures, as well as the lifelong impact of bullying and discrimination... A must-read on self-love, beauty, disability, visibility, and community." —Booklist, starred review

"Complex and searing... This smart, richly detailed memoir is a compelling meditation on identity as well as a much-needed challenge to an ableist system." —Publishers Weekly

"With a perceptive analysis of the way beauty standards shape the most basic social values and a fascinating coming-of-age story told from a unique perspective, Henley’s memoir is not to be missed. ­Captivating, unflinching, and insightful, this title is ­highly recommend." —School Library Journal