Augusta Savage: The Shape of a Sculptor's Life (Hardcover) 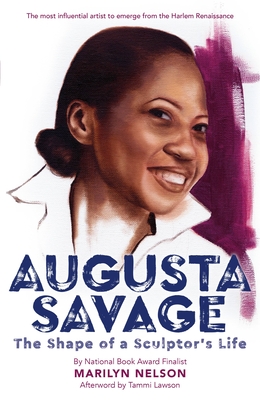 Augusta Savage: The Shape of a Sculptor's Life (Hardcover)


Usually Ships in 1-5 Days
A powerful biography in poems​ about a trailblazing artist and a pillar of the Harlem Renaissance—with an afterword by the curator of the Art & Artifacts Division of the Schomburg Center for Research in Black Culture.

Augusta Savage was arguably the most influential American artist of the 1930s. A gifted sculptor, Savage was commissioned to create a portrait bust of W.E.B. Du Bois for the New York Public Library. She flourished during the Harlem Renaissance, and became a teacher to an entire generation of African American artists, including Jacob Lawrence, and would go on to be nationally recognized as one of the featured artists at the 1939 World’s Fair. She was the first-ever recorded Black gallerist. After being denied an artists’ fellowship abroad on the basis of race, Augusta Savage worked to advance equal rights in the arts. And yet popular history has forgotten her name. Deftly written and brimming with photographs of Savage’s stunning sculpture, this is an important portrait of an exceptional artist who, despite the limitations she faced, was compelled to forge a life through art and creativity.

Marilyn Nelson is the author of many award-winning books, including Carver: A Life in Poems, which was a National Book Award finalist, a Newbery Honor Book, and a Coretta Scott King Honor Book and received the Flora Stieglitz Straus Award and the Boston Globe–Horn Book Award. She is also the author of A Wreath for Emmett Till, which garnered the Boston Globe–Horn Book Award, a Coretta Scott King Honor, a Printz Honor, and a Lee Bennett Hopkins Poetry Award Honor. She lives in Connecticut.

Tammi Lawson is the curator of the Art and Artifacts Division at the Schomburg Center for Research in Black Culture and the steward of a collection of over fifteen thousand items that visually document the Black Diaspora. The Schomburg also houses the largest collection of art by Augusta Savage in a public institution. The New York Public Library recently awarded Lawson the 2020 Bertha Franklin Feder Award for Excellence in Librarianship.

Praise for Augusta Savage:
A Kirkus Best Book of the Year?
A School Library Journal Best of the Year
A Junior Library Guild Selection


* “A stunning portrait of artistic genius and Black history in America.”

* “In a rich biography in verse, Nelson (A is for Oboe) gives voice to the Black sculptor Augusta Savage (1892-1962), a key Harlem Renaissance figure.”

* “Nelson’s arresting poetry, which is accompanied by photographs of Savage’s work, dazzles as it experiments with form. … A lyrical biography from a master of the craft.”

* “A master poet breathes life and color into this portrait of a ­historically significant sculptor and her remarkable story.”—School Library Journal, starred review

Praise for A Wreath for Emmett Till:

* "This memorial to the lynched teen is in the Homeric tradition of poet-as-historian . . . This chosen formality brings distance and reflection to readers, but also calls attention to the horrifically ugly events."

"These poems are a powerful achievement that teens and adults will want to discuss together."

"A moving elegy indeed." —The Bulletin