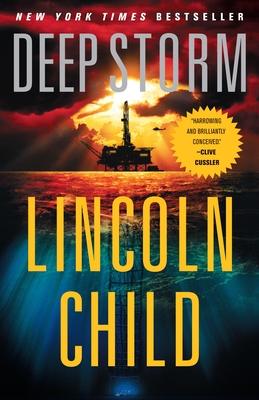 This is book number 1 in the Jeremy Logan Series series.

NEW YORK TIMES BESTSELLER • In this explosive thriller, one of the most incredible and frightening discoveries mankind has ever faced is about to surface.

On an oil platform in the middle of the North Atlantic, a terrifying series of illnesses is spreading through the crew. When expert naval doctor Peter Crane is flown in, he finds his real destination is not the platform itself but Deep Storm: a top secret aquatic science facility, two miles below on the ocean floor. And as Crane soon learns, the covert operation he finds there is concealing something far more sinister than a medical mystery—and much more deadly.

Lincoln Child is the author of Death Match, Deep Storm, Terminal Freeze, The Third Gate, and The Forgotten Room, as well as co-author, with Douglas Preston, of numerous New York Times bestsellers, including Blue Labyrinth, White Fire, Cold Vengeance, and Relic. He lives with his wife and daughter in Morristown, New Jersey.
Praise for Lincoln Child and Deep Storm

“His characters are first-rate, as is his writing.”—The Washington Post Book World

“Imaginative and filled with wonder. Lovers of deep-sea adventure . . . will want to plunge into this one.”—Booklist