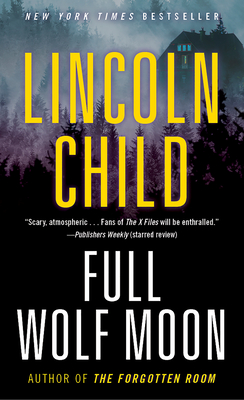 This is book number 5 in the Jeremy Logan Series series.

NEW YORK TIMES BESTSELLER • On the trail of a killer who cannot possibly exist ... Jeremy Logan, the renowned "enigmalogist," has often found himself in situations where keeping an open mind could mean the difference between life and death, and that has never been more true than now.

When Logan travels to an isolated writers' retreat deep in the Adirondacks to work on his book, he discovers the remote community has been rocked by the grisly death of a hiker on Desolation Mountain. The attack occurred during the full moon and the body was severely mauled, but the unusual savagery calls into question the initial suspicions of a bear attack. Logan's theories take a dramatic turn when he meets Laura Feverbridge, a respected scientist who is still struggling with the violent loss of her father months earlier. As Feverbridge shares her research with Logan, he begins to wonder whether he is actually up against something he can’t believe is real.
LINCOLN CHILD is the New York Times bestselling author of The Forgotten Room, The Third Gate, Terminal Freeze, Deep Storm, Death Match, and Utopia, as well as coauthor, with Douglas Preston, of numerous New York Times bestsellers, most recently Crimson Shore. He lives with his wife and daughter in Morristown, New Jersey.
Praise for Lincoln Child and Full Wolf Moon

“Lincoln Child's Jeremy Logan novels just get better and better, and this latest installment really knocks it out of the park. Full Wolf Moon proves again that mysterious phenomena with a supernatural or otherworldly edge are fully in Child's wheelhouse, and the result this time around is an intense and chilling read.” —Bookreporter

“Child's characters are first-rate, as is his writing.” —The Washington Post Book World

“Child creates a perfectly creepy ambiance, and his dialogue and descriptions are yeomanlike.” —Kirkus Reviews

“Lincoln Child is a master at mystery plots.” —The Florida Times-Union