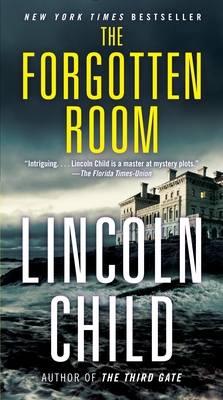 This is book number 4 in the Jeremy Logan Series series.

NEW YORK TIMES BESTSELLER • Another page-turning installment in the Jeremy Logan series: A long-lost experiment of unknown intent ... a hidden room in a vast seaside estate ... an investigator marked for danger ...

On a sprawling estate on the coast of Rhode Island, at the nation’s oldest and most prestigious think tank, an unfathomable tragedy takes place. No one knows what to make of the disturbing evidence left behind. Then reports begin to surface of increasingly bizarre behavior among the organization’s distinguished scientists.

Called upon to investigate these strange happenings, history professor and analyst of inexplicable phenomena Jeremy Logan comes across an ingeniously concealed room in a long-dormant wing of the mansion. What he discovers within may provide answers—and, in the process, unleash a new wave of catastrophe.
Lincoln Child is the New York Times bestselling author of The Third Gate, Terminal Freeze, Deep Storm, Death Match, and Lethal Velocity, as well as coauthor, with Douglas Preston, of numerous New York Times bestsellers, most recently Crimson Shore. He lives with his wife and daughter in Morristown, New Jersey.
Praise for Lincoln Child and The Forgotten Room

“Intriguing. . . . Lincoln Child is a master at mystery plots.” —The Florida Times-Union

“Electrifying . . . One of Child’s best yet.” —Library Journal (starred review)

“Reflects the best of the ‘mad scientist and locked room’ mysteries of the early twentieth century . . . Fun and intriguing.” —Associated Press

“Chilling. . . . Child makes the most of the creepy setting, his unusual lead character, and an intricate plot.” —Publishers Weekly

“[A] very imaginative story for those who prefer a soft blending of mystery and paranormal.” —Booklist

“Child’s characters are first-rate, as is his writing.”—The Washington Post Book World