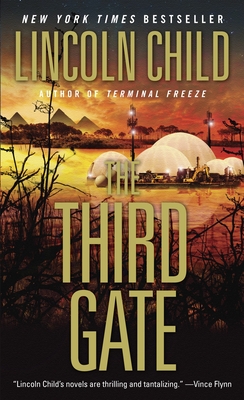 This is book number 3 in the Jeremy Logan Series series.

NEW YORK TIMES BESTSELLER • An archaeological expedition digging where it shouldn’t ... A crown so powerful it is rumored to be cursed ... And the one man who can explain it all ...

Deep in a nearly impassable swamp south of the Egyptian border, an archaeological team is searching for the burial chamber of King Narmer, the fabled pharaoh. Narmer's crown might be buried with him: the elusive "double" crown of the two Egypts. Amid the nightmarish, disorienting tangle of mud and dead vegetation, strange things begin to happen. Could an ancient curse be responsible? Jeremy Logan, history professor and master interpreter of bizarre and inexplicable enigmas, is brought onto the project to investigate. What he finds raises fresh questions ... and immediate alarm.

"By mixing fact and fiction as well as science and the occult, Lincoln Child once again has created an offbeat thriller that is both exciting and thoughtprovoking."
--The Free Lance-Star

"Ample gadgetry, New Age soul-shifting, and pyrotechnics sufficient to employ a stable of stuntmen when brought to film: Child’s newest is the sort of thing to delight all those who got wrapped up in The Mummy. Think, a Dan Brown-ian adventure amongst Pharaohs ready with a pocket full of curses."
--Kirkus

"Its characters are well drawn, and the mystery is nicely handled, keeping readers guessing as to whether something supernatural is going on here. Of the author’s solo novels, this could be the best so far."
--Booklist