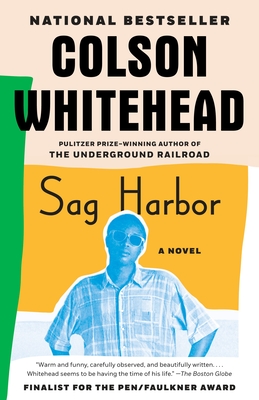 “Colson Whitehead's Sag Harbor, a coming-of-age novel set in small community of African-American professionals in the Hamptons, is a masterpiece. Is Whitehead the greatest writer of his generation? He bids fair.”
— Sarah McNally, McNally Jackson Books, New York, NY

NATIONAL BESTSELLER • From the two-time Pulitzer Prize-winning author of The Underground Railroad and The Nickel Boys: a hilarious and supremely original novel set in the Hamptons in the 1980s, "a tenderhearted coming-of-age story fused with a sharp look at the intersections of race and class” (The New York Times).

Benji Cooper is one of the few Black students at an elite prep school in Manhattan. But every summer, Benji escapes to the Hamptons, to Sag Harbor, where a small community of Black professionals have built a world of their own.

The summer of ’85 won’t be without its usual trials and tribulations, of course. There will be complicated new handshakes to fumble through and state-of-the-art profanity to master. Benji will be tested by contests big and small, by his misshapen haircut (which seems to have a will of its own), by the New Coke Tragedy, and by his secret Lite FM addiction. But maybe, just maybe, this summer might be one for the ages.

Look for Colson Whitehead’s bestselling new novel, Harlem Shuffle!
Colson Whitehead is the Pulitzer-Prize winning author of The Underground Railroad. His other works include The Noble Hustle, Zone One, Sag Harbor, The Intuitionist, John Henry Days, Apex Hides the Hurt, and one collection of essays, The Colossus of New York. A National Book Award winner and a recipient of MacArthur and Guggenheim fellowships, he lives in New York City.
“Warm and funny, carefully observed, and beautifully written. . . . Whitehead seems to be having the time of his life.” —The Boston Globe

“Sag Harbor is a kind of black ‘Brighton Beach memoirs’. . . . The novel’s eight chapters are, in effect, masterful short stories [that] riff on the essential quests of teenage boys: BB guns, nude beaches, beer and, above all, the elusive secret to fitting in.” —The Washington Post

"Whitehead has tapped the most classic summer-novel activity of all: nostalgia. . . . The pleasure is in the way Whitehead recalls it, in loving and lingering detail.” —Time

“Surges and sings. . . . Stokes our emotions and intellect at once.” —Dallas Morning News

“Weaves a spell that is by turns enchanting, mood-shifting, and side-splitting.” —Elle

“By acknowledging that adolescence’s indignities are universal, and that the search for self is endless, Sag Harbor brings this truth home.” —Vanity Fair

“Imagine a younger version of Bill Cosby, only more lyrical and far racier, with added literary and sociocultural references at his disposal and a greater familiarity with what the book terms ‘the insistent gray muck that was pop culture’ as it seeped through the ‘80s.” —Newsday

“All of Whitehead's previous books were various degrees of funny, and Sag Harbor is funnier than all three combined.” —The Village Voice

“[J]ust as Benji is in the process of remaking himself, one gets the feeling after reading Sag Harbor that Whitehead is taking his first artistic steps away from what has come to be expected from ‘Colson Whitehead.’ And it's safe to say, we're happy, and very lucky, to have both the who he was and the who he'll become out there, telling us like it is.”  —The San Francisco Chronicle

“He can write sentences like nobody’s business, and the deepest satisfaction in this book full of them is his crafty turn of phrase.”  —Bloomberg News